The Big Cleanup greened and celebrated on the Esplanade 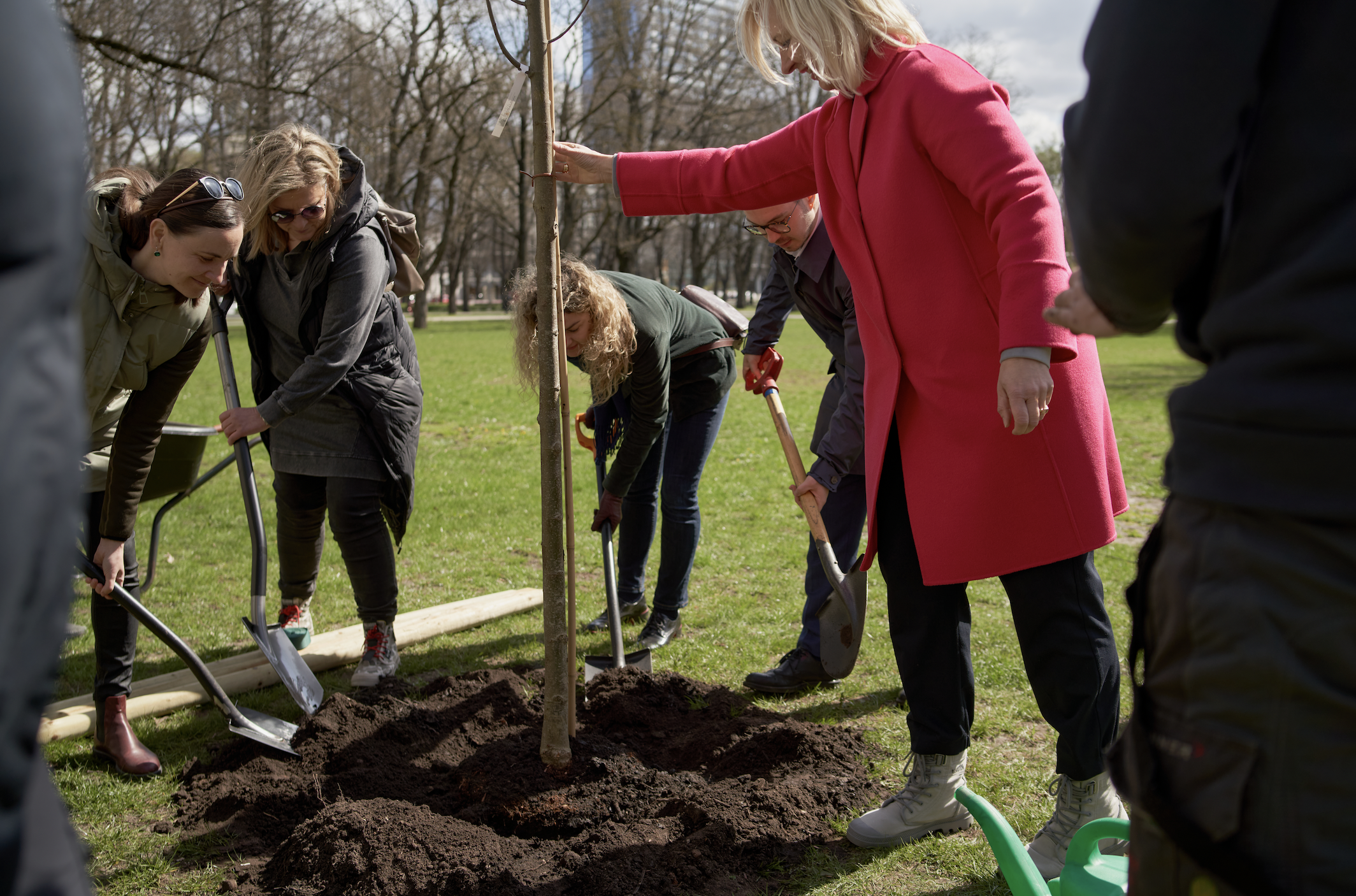 In anticipation of the Big Cleanup, which will take place on Saturday, 30 April, today the Big Cleanup was greened up and announced on the Esplanade. During the event, the attendees were informed about this year’s Big Cleanup activities while the participants shared their thoughts on how to strengthen public involvement in cleanup activities and promote care for a clean and healthy environment. At the end of the cleanup, a Dutch linden tree was planted in the Linden Avenue of Esplanade Park.

The cleanup event at Esplanade was attended by Vita Jaunzeme, Head of the Big Cleanup, Artūrs Toms Plešs, Minister of Environmental Protection and Regional Development, Anita Skudra, Chairwoman of the Board of Riga City Forests, Līga Abizāre, Latvia’s State Forests Head of Environmental Education and Liene Apine, General Secretary of the Latvian Paralympic Committee.Igeta Ozoliņa, the leader of the ensemble “Stiprās sievas”, delighted the participants with songs of strength.

Minister of Environmental Protection and Regional Development Artūrs Toms Plešs: “Waste is a resource that can be reused, recycled and put to good use. However, waste is only a resource when it ends up not in forests, waterways and roadsides, but in the waste management system – by sorting waste every day, using the deposit system and keeping it out of the environment around us. Thus, by giving waste a second wind, we are giving nature a break. The Big Cleanup is a great way to provide this respite, but I also encourage everyone to think about the habits that will reduce pollution every day and give the necessary impetus to the development of the circular economy in Latvia.”

“Waste is a severe blow to nature, to biodiversity and to climate neutrality! In order to ensure that the environment is not destroyed to the core, this is the decisive moment to categorically ban littering at a national level, to strictly control it and to impose appropriate penalties, not only in monetary terms, but to make people spend hundreds of hours picking up litter, working for the good of nature! And there is still a need to find ways to recycle waste, in particular tyres, to produce products that people and the economy need. Soon there will be a situation where the forests will be flooded with regularly discarded waste and our workers will no longer be able to cope with it. “Riga City Forests is particularly active in informing people and shaping attitudes. So we are grateful to the Big Cleanup and to everyone who takes part in it!” says Anita Skudra, Chairwoman of the Board of Riga City Forests.

“Looking back over the past 15 years, significant work has been done to promote public concern for a clean and tidy environment. We, the people of Latvia, can say that our country is the greenest in the world, because more than half of its territory is forest. Although pollution in forests has been increasing in recent years, we feel that there are responsive and responsible people around, because we receive reports of contaminated sites. This year, within the framework of the Big Cleanup, we have provided 300 000 bags to take part in the cleanup activities and do some good work together. We encourage everyone to remember that by picking up litter and taking care of the cleanliness of the environment every day, we not only leave nature clean, but also create a safer environment for animals,” Līga Abizāre, Head of Environmental Education at Latvia’s State Forests, invites everyone to take part in the cleanup.

“Every year the Latvian Paralympic Committee ambitiously participates in the activities of the Big Cleanup and this year will be no exception. This year, the Committee’s staff, athletes and medal winners will clean up Bišumuiža together with the President of Latvia Egils Levits and his wife. This is an important place for athletes, as there are plans to establish a Latvian Paralympic Sports Centre in the future, where Paralympic athletes and everyone else can train. The involvement of Paralympians in the cleanup activities shows that we need to build an empathetic society, where we realise that we are all equal, regardless of our physical abilities. We hope that mutual understanding and cooperation will grow stronger every year!” Liene Apine, General Secretary of the Latvian Paralympic Committee, says about the cleanup activities.

Vita Jaunzeme, the Head of the Big Cleanup, encourages: “So far this year, almost 1,000 cleanup sites have been registered, which shows that caring for nature is still important to a large part of society. As a reminder, this year, waste collection cleanups can be registered until midnight on 27 April, but the map for improvement cleanups will be available until the day of the Big Cleanup. This year, after a two-year break, we also have the opportunity to organise public cleanups. I wish every cleanup worker to experience the feeling of a job well done and to appreciate their contribution to a cleaner and tidier Latvia. Get up, get ready, get involved!’’

The history of the Esplanade greenery, which is under the care of the Gardens and Parks department of Riga City Forests, goes back almost 140 years – in the mid-1880s the first greenery was established here. But 120 years ago, in 1902, Georg Kuphaldt, the Head of the Riga City Gardens Administration and the main greenery designer of the time, started the creation of the Esplanade Park. He also created the Dutch linden avenue (behind the Art Museum and Art Academy). It is horseshoe-shaped and was intended to provide shade and a resting place for cavalry horses and their riders. In some places, the linden trees planted in the past have outlived their lives and today, by planting a Dutch linden, we are renewing old plantations, linking the past with the future.

About the Big Cleanup: The Big Cleanup is a non-governmental movement in Latvia that since 2008 has not only been organising cleanups and landscaping events throughout the country, but has also implemented various projects to educate the public on environmental issues. The President of Latvia is the patron of the Big Cleanup, making Latvia one of the first countries in the world to have such a high level of state support for environmental activities. In August 2019, the patronage was taken over by the President of Latvia Egils Levits.

See you at the Big Cleanup this Saturday on 30 April all over Latvia!